Abandoned Mine Land Project on the Horizon 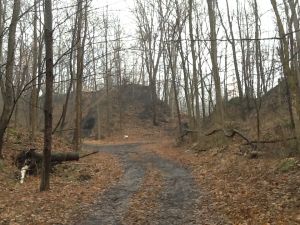 After two years of planning and preliminary work, the Kerbaugh Refuse Pile Project will begin in 2022. Funding is available through a grant program administered by the Department of Environmental Protection’s Bureau of Mines and is intended to cleanup legacy coal waste sites. The project will address up to 22 acres of what DEP calls Priority 2 Dangerous Pile Embankment (DPE) abandoned coal refuse in Antis Township, a short distance from the Little Juniata River south of Bellwood  Borough. Much of the tree cover was removed in 2020 and the remainder will taken down this summer. Robindale Energy will remove the coal waste for use in their coal waste facility, a technology that was unavailable to coal processors and users a century ago when the pile was created.

According to the grant application, the project would directly benefit the residents and businesses of both Bellwood Borough and Antis Township and another 57,504 residents in adjacent municipalities. It could remove up to approximately 800,000 tons or cubic yards of loose rock, coal processing waste and combustion ash. The 50-foot high pile is steeply sloped and (though previously partially covered by vegetation) is eroding into several tributaries of the Little Juniata River, east of Kerbaugh Road and parallel to the mainline of the Norfolk Southern Railroad. 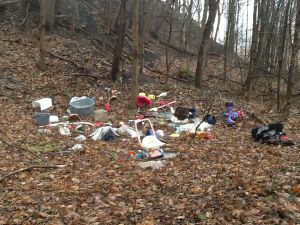 Illegally dumped municipal solid waste (shown to the left in this 2019 photo) and active all-terrain vehicle (ATV) trails on the steep slopes of the refuse pile exacerbated the polluted runoff from the pile. Clean-up of the dumping areas alone (already completed) has provided for significant environmental improvement while discouraging future dumping. The proposed plan is to excavate and haul the suitable refuse material to a coal waste electrical generation facility. DEP has selected Robindale Energy to provide that service. Remaining material will be blended with alkaline material, and the site will be regraded to lessen and/or eliminate the stormwater runoff and groundwater infiltration from the pile. After grading, the site will be revegetated and trees will be planted in appropriate locations. Trees and other native plants will also be established, including rain garden retention areas, so as to reduce flooding potential and provide the most effective stream buffers possible. This will improve the water quality of the unnamed tributaries of both the Little Juniata River (at the north end of the pile) and Sugar Run (at the south end of the pile).

The History of the Coal Waste

The steep slopes and resultant dangerous conditions related to the Kerbaugh Pile are a result of coal, ash and related material generated by the Kerbaugh Company prior to 1935. This abandoned coal processing and disposal feature meets the Office of Surface Mining’s (OSM’s) Priority 2 safety criteria. The reclamation will allow Antis Township to ultimately construct 4.5 miles of trail. This will initially include a 2.8 mile trail segment (1.6 miles on the Kerbaugh site connected with the AML Pilot Category A Project and 1.2 miles on the phase south of the reclaimed parcel). The subsequent work will be undertaken with other funding and would connect Downtown Bellwood, the Bellwood-Antis Community Park, Bells Gap Trail, Logan Valley Trolley Trail, and the soon-to-be constructed northern terminus of the First Frontier Trail. Several trail, recreation and community plans identify this path so that one day a trail will stretch from Tyrone, to Bellwood, onto Altoona, and (at one point in the future) Hollidaysburg and the Lower Trail. Though not as long or not serving the population base of the Great Allegheny Passage, our trail system should produce proportionally similar economic and quality of life benefits.